The man with the golden hands from the roof

Arriving at the churchyard in Vormsi, there was no need to search for Aare from afar, the man was on the roof. In the same place where he has spent the last almost three months without days off. How Aare Laanes, the site manager of Resteh OÜ, came across Vormsi, how the construction work on the church roof has progressed, and what impression Vormsi and the people from Vormsi have left on him. Aare and I talked about all of this at the beginning of the week of St. Olaf's Day, when the end of the construction work had imperceptibly arrived. 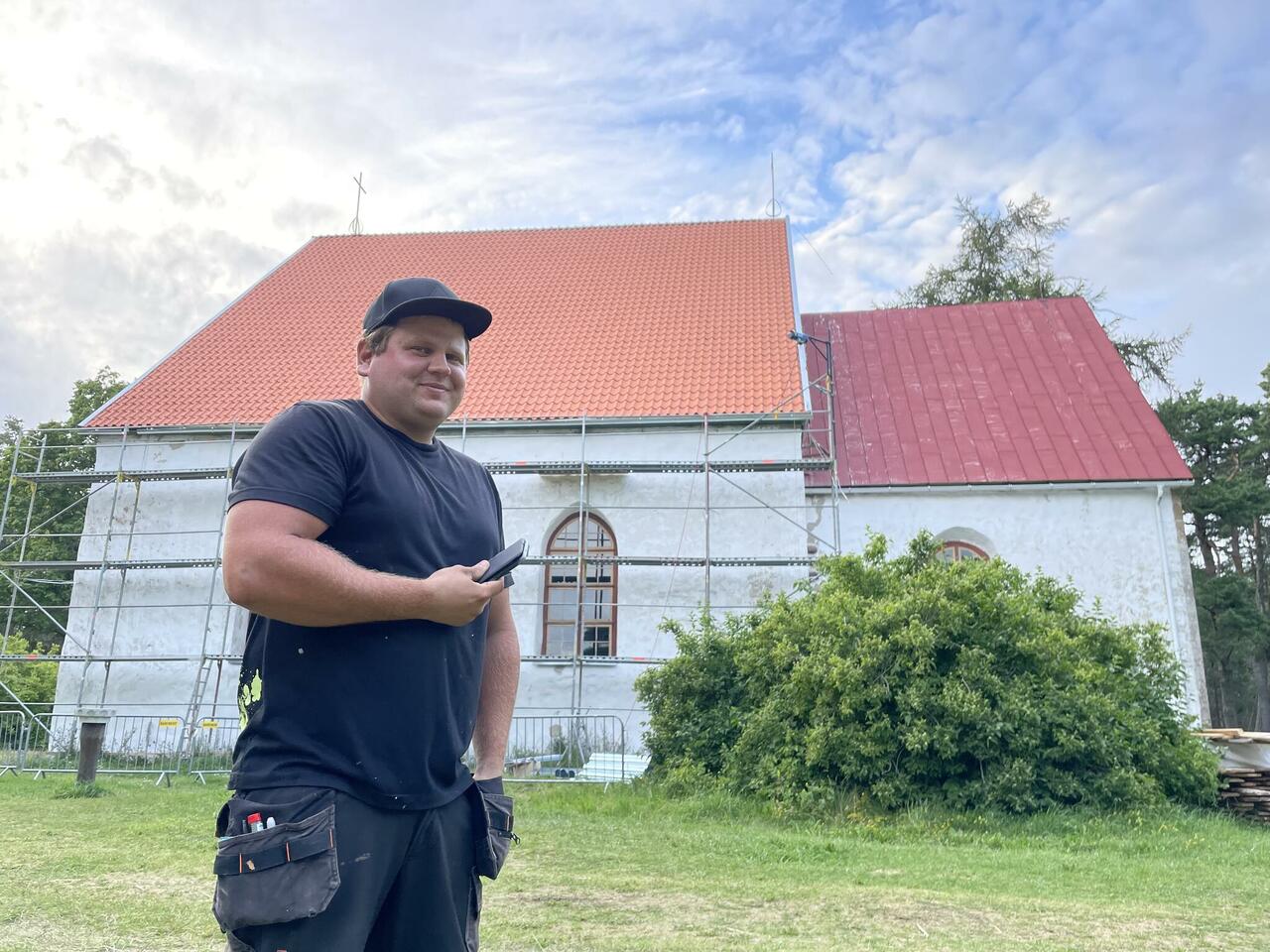 How did you end up building a roof for the church in Vormsi?

We have restored quite a lot of churches and manor buildings. Experience and recommendations have come from there. We have mostly operated in Lääne County and Rapla County. Last year, three churches were under our construction at the same time - the tower of St. John's Church, the roof of the choir room of Piirsalu Church, and the roofs of the buttress of Kullamaa Church. I had never been to Vormsi before, which was one of the reasons why I gladly accepted this job. Solving the logistics of the island seemed exciting. I myself live on a farm twenty kilometers from Haapsalu towards Keila. Now I have taken more ferry trips in a short period of time than in my entire previous life combined.

The big challenge was logistics.

We had to plan the ferry times a week in advance. But the ferry crew was very nice to work with, they were very helpful. The materials were put on the ferry from the mainland, I went to Sviby harbor and we received the things on the same day. Two days of crane work was calculated to lift the stones to the roof, but we got the job done in half a day. However, the crane driver was in a lot of trouble because there was no way he could get a place to return to the earlier ferry. We brought the scaffolding to Vormsi for three days by traveling back and forth on the ferry with a small box truck. It was not possible to get a ticket for a bigger car - it was May and the time of forest transport.

Communication with the locals from the church to the pub.

The local people welcomed us very warmly. First Ants and Kristina from church. The shopkeepers were our best supporters, Liina from the Retro cafe offered good pizza, we became great friends with Arvo from the harbor and Hardi from the Krog. By the way, the cellulose wool from the church's attic now migrated to the second floor of the Krog - the church and the pub have been hand in hand since ancient times. We were happy, otherwise the wool would have gone to waste. I announced in the Facebook group Vormsilased that the rainwater pipes were on offer and they found immediately a new owner. It does not make sense for us to transport waste to the mainland if it can be used locally. The accommodation in the parsh house's sauna was very comfortable. If there was no sauna, I would definitely have gone off the island more often, now there was no need. Everything was excellent from Vormsi side.

There were a lot of surprises during the construction work.

Laying the roof tiles was actually the smaller part of the work, replacing the rotten wooden parts (rafters, beams, battens) took the majority of the time. When we removed the first tin sheet, we immediately came upon a vein of gold - exactly in this place, there was a rafter that had rotted through its full length. For a while, there was a real fear that maybe the next rafters would need the same amount of work, but luckily this was the only rafter that needed to be replaced in full length. At first, it was a mystery how that rafter could be almost empty inside. In essence, the rafter functioned as a gutter. One day Ants Varblane came to greet us and wish us strength and solved the mystery. In 1988, he himself had examined the rotted part of the rafter so that the rafter would not rot further. Since changing the rafter would have been too much of a job at that time, the rafter was supported on the sides, and this solution has lasted until now. The old solution would not have been able to withstand the load of the significantly heavier stone roof, and the rafter was now replaced with a new one. It was interesting that the wooden structures were only in bad shape on the south side of the roof. The back side was in perfect condition. In addition to one of the beforementioned 8-meter rafters, it was also necessary to replace the wall battens. Since the amount of woodwork grew significantly larger than expected, this year the roof of the buttress on the north side and the walkways on the attic pennies will not be done. According to the project, it was planned to replace only a few pins, but it was necessary to make about thirty pins instead. Making pins is the most time-consuming (and expensive) job. You saw wood through with a hand saw, hammered it together with a hammer and so on ten times in a row until neither paper nor a hair can fit through it.

The majority of the material we used for taping, we brought from the mainland ourselves. It must have been dry for many years. But the rest of the material was all from the island. We were very satisfied with the material. The wood of Vormsi is dense and heavy. Because of this exact quality, Vormsi wood is so expensive and in high demand.

The old sheet metal was very thick and neat, not rusty at all, but the rollers got loose over time. It is bad to roll such a thick sheet, such material cannot be compressed tightly enough.
Now the church has a double roof. Under the stone is another watertight SPS-roof with full boards. If, for example, snow blows through the S-stone in winter, all the snow/water runs down the other roof and it cannot damage the wooden structures.
I will not predict the time, it is a thankless job. Anyway, it's done properly, I can confirm that. The supervision has also been very satisfied with the work.

As with any old thing, there was a lot of figuring out. Several pins made during the previous repair had to be replaced because they do not meet today's requirements. The golden rule is that the pin must be at least twice the diameter of the material, i.e. for a large beam, there must be at least a 60 cm pin. We had to create several special solutions and gimmicks for the pins, because with the constructions here, 60 cm did not work out in some places. Making pins is such a specific job that I had to do most of the pins myself.
The exciting challenge was taking down the cross and the weathervane from the roof, painting them and bringing them back. The weight of this cross made it difficult, it was almost 100 kilograms. Lifting such a weight in turns on the roof is a real test.
It was also an interesting discovery that the air bladder of a bicycle was placed under the cross and weathervane so that it would hold water. The work methods were basically correct - it was intended that the solution would hold water. It was solved simply with the tools available, it was a different time then, and everything was understandable.

The techniques are passed directly from master to master.

I learned a lot from my father. I studied general engineering at the Haapsalu Vocational School and I studied civil engineering at the Tallinn Technical College. Directly restoration I haven't studied at school. It's come from working experience and from my father. The very first place of practice was the barn of the Lihula manor, and already my third job was a church - the roof of the Ridala church. I got over my fear of heights already then.

Birthday under the cross

This entire roof was made with essentially three men, the core team also included Viktor Startsev and Ardo Jürjer. We started on May 9 and since then we have been here practically all the time. We have also worked on Saturdays and Sundays, except for the times of church services. I also spent my birthday on the roof - I remember it well, because on that day I installed lightning protection for the cross.

The weather was rather generous

The goal was to have a waterproof roof on by Midsummer's Day. We made it by then. After that, the weather turned bad. So we were lucky. I remember that when there was only a film on the roof, which is never 100% waterproof, I went to put buckets in the attic at 2 a.m. when it started to rain. That's the job of the site manager, he has to solve all situations. Meanwhile, while the stones were being laid on the roof, the weather was very changeable. It was good that we could choose to work under the roof for days when the sun alternated with rain.

The long working days allowed us to stay on schedule for three months.

The stone patching part went particularly smoothly. The men had a strong motivation to finish quickly and the pace was on. Even though it was originally planned that 2/3 of the stones would be clamped, we decided to be safe and clamped all the stones to make the roof as windproof as possible. The next job is to lay the cornices of Kullamaa Church. And after that comes a well-deserved rest.

The speciality of Vormsi enthralled

The people of Vormsi are very nice. It was interesting, for example, that everyone waves when you drive a car. At first, we thought that we had a car similar to someone else's, but then we realized that this is how it should be done and followed it. It creates a good feeling as if everyone are great friends.
The tare system is powerful on the spot. This [throwing the tare into the bag manually] is much faster than modern automatic machines. I have really started to like life on the island. A joke was already made that I should start looking for a plot, because the island is always in need of men with golden hands.
With three months on the island, I really got used to its habits. When I go to the mainland, I forget to close doors and do other things that quickly became typical on the island. I definitely plan to come back to Vormsi as a guest.

The most popular question that we had to answer every day was, where are the sun crosses located? A big signpost to the cemetery would be needed. We would have finished our work faster if we didn't have to constantly lead the way :) We met a lot of different people while working here. On the first day, there was, for example, a gentleman from Singapore. Unexpectedly, I also met my mainland neighbor who was bringing people to church by bus. While working at the church, it became clear that no matter what time of day you come, there is always someone walking around the church and asking for the way to the sun crosses.